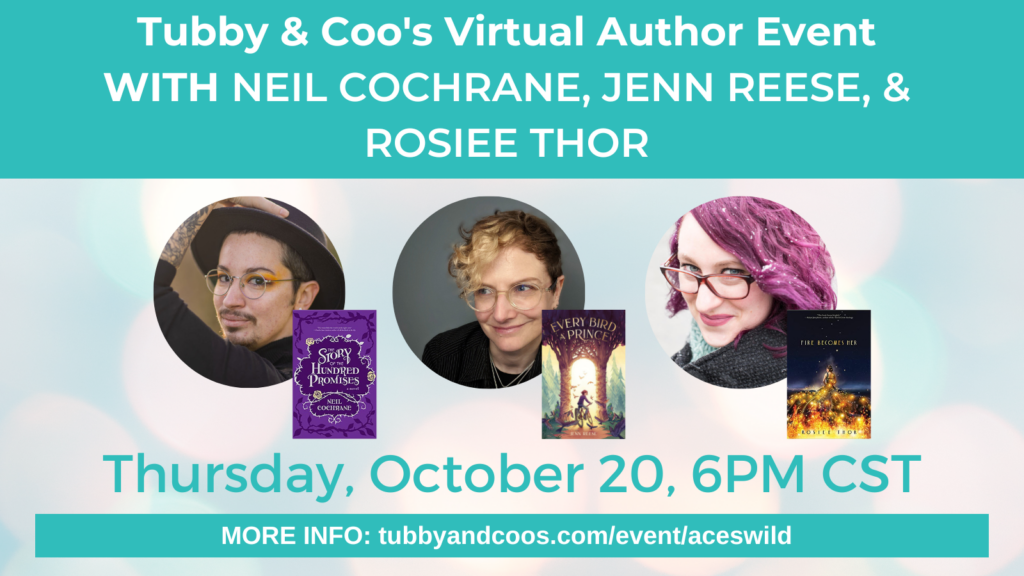 Tubby & Coo’s Mid-City Bookshop is pleased to present an aromantic/asexual author panel! Aromantic and asexual orientations are some of the least represented and most misunderstood in the queer umbrella. Aro- and ace-spec authors Neil Cochrane, Jenn Reese, and Rosiee Thor come together in this event to discuss their experiences and the representation of them in middle grade, young adult, and adult fiction. This event will be held digitally via Crowdcast.

You can register for this event by ordering any of the books below or you can click here to register with a donation of any amount of your choice. Donations are to help sustain our events programming. If you cannot afford to purchase the book or to donate even $1, you may register for the event for free, no questions asked, by e-mailing us at events@tubbyandcoos.com. There will also be the option to purchase the books during the event!

ABOUT THE STORY OF THE HUNDRED PROMISES BY NEIL COCHRANE

Trans sailor Darragh Thorn has made a comfortable life for himself among people who love and accept him. Ten years after his exile from home, though, his sister asks him to reconcile with their ailing father. Determined to resolve his feelings rather than just survive them, Darragh sets off on a quest to find the one person who can heal a half-dead man: the mysterious enchanter who once gave him the magic he needed to become his true self. But so far as anyone knows, no one but Darragh has seen the enchanter for a century, and the fairy tales that survive about em give more cause for fear than hope. In lush and evocative prose, and populated with magical trees and a wise fox, The Story of the Hundred Promises is a big-hearted fantasy suffused with queer optimism.

ABOUT EVERY BIRD A PRINCE BY JENN REESE

A girl’s quest to save a forest kingdom is intertwined with her exploration of identity in this middle-grade contemporary fantasy by Jenn Reese, the award-winning author of A Game of Fox & Squirrels.

The only time Eren Evers feels like herself is when she’s on her bike, racing through the deep woods. While so much of her life at home and at school is flying out of control, the muddy trails and the sting of wind in her face are familiar comforts.

Until she rescues a strange, magical bird, who reveals a shocking secret: their forest kingdom is under attack by an ancient foe—the vile Frostfangs—and the birds need Eren’s help to survive.

Seventh grade is hard enough without adding “bird champion” to her list of after-school activities. Lately, Eren’s friends seem obsessed with their crushes and the upcoming dance, while Eren can’t figure out what a crush should even feel like. Still, if she doesn’t play along, they may leave her behind…or just leave her all together. Then the birds enlist one of Eren’s classmates, forcing her separate lives to collide.

When her own mother starts behaving oddly, Eren realizes that the Frostfangs—with their insidious whispers—are now hunting outside the woods. In order to save her mom, defend an entire kingdom, and keep the friendships she holds dearest, Eren will need to do something utterly terrifying: be brave enough to embrace her innermost truths, no matter the cost.

ABOUT FIRE BECOMES HER BY ROSIEE THOR

In Rosiee Thor’s lavish fantasy novel with a Jazz Age spark, a politically savvy teen must weigh her desire to climb the social ladder against her heart in a world where magic buys votes.

With only a drop of flare, one can light the night sky with fireworks . . . or burn a building to the ground — and seventeen-year-old Ingrid Ellis wants her fair share.

Ingrid doesn’t have a family fortune, monetary or magical, but at least she has a plan: Rise to the top on the arm of Linden Holt, heir to a hefty political legacy and the largest fortune of flare in all of Candesce. Her only obstacle is Linden’s father who refuses to acknowledge her.

So when Senator Holt announces his run for president, Ingrid uses the situation to her advantage. She strikes a deal to spy on the senator’s opposition in exchange for his approval and the status she so desperately craves. But the longer Ingrid wears two masks, the more she questions where her true allegiances lie.

Will she stand with the Holts, or will she forge her own path?

Neil Cochrane is a queer, trans author and artist living and working in Portland, Oregon. He writes speculative fiction that centers queer characters overcoming obstacles and building families. He has worked in and around the publishing industry since 2012, in such various roles as editor, literary agent assistant, marketing director, and bookseller. He is represented by Michaela Whatnall of Dystel, Goderich & Bourret.

Jenn Reese (she/they) writes speculative fiction for readers of all ages. She is the author of A Game of Fox & Squirrels, an NPR Best Book of 2020, a finalist for the Andre Norton Award and the Mythopoeic Award, and winner of the Oregon Book Award and Oregon Spirit Book Award. Their other publications include the Above World trilogy and numerous short stories and essays. Jenn lives in Portland, Oregon where she makes art, plays video games, and talks to the birds.

Rosiee Thor began their career as a storyteller by demanding to tell their mother bedtime stories instead of the other way around. They spent their childhood reading by flashlight in the closet until they came out as queer. They live in Oregon with a dog, two cats, and an abundance of plants. They are the author of Young Adult novels Tarnished Are The Stars and Fire Becomes Her and the picture book The Meaning of Pride.