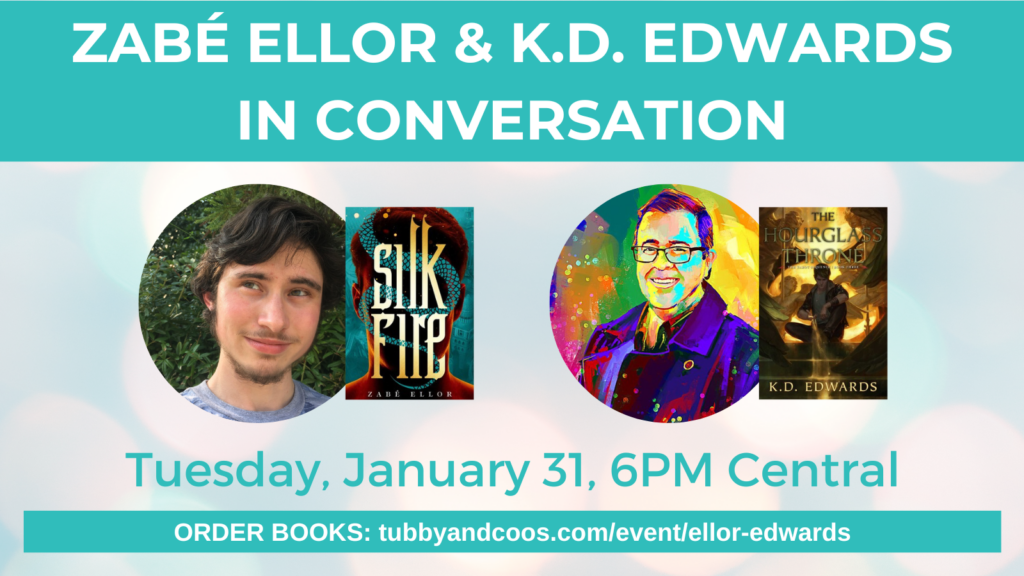 Tubby & Coos Mid-City Bookshop is pleased to present Zabé Ellor and K.D. Edwards in conversation about writing LGBTQ representation in epic fantasy worlds and discuss their latest releases Ellor’s Silk Fire and Edwards’ The Hourglass Throne. This event will be free and held digitally via YouTube.

You can purchase either book below! You can also donate any amount of your choice below to help sustain our events programming.

Order the books below!

Set in a planet-sized matriarchal city where magic and technology freely bleed together, a male courtesan’s quest for vengeance against his aristocrat father draws him into an ancient struggle between dragons, necromancers, and his home district’s violent history.

In the world-sized city of Jadzia, magic and ancient science merge into something dark and wondrous.

Koré’s life is consumed by power, politics, sex and vengeance, and as courtesan to the wealthy and powerful, he is privy to all manner of secrets. He knows meddling in politics is dangerous─still, he is willing to risk everything to stop his father from seizing the Imperial Throne of the War District. But Koré soon finds the corruption runs far deeper than just one man.

During a tryst in an ancient tomb─in the pursuit of political influence─Koré encounters a dying god, who imbues him with the powers of one of the city’s sacred dragons. Suddenly Koré finds himself a hunted man, threatened with becoming a pawn by whoever finds him first.

If the wrong person discovers his secret and lays claim to his powers they would plunge their world into war, unleash untold horrors and destroy the city─and the two people he has come to love.

ABOUT THE HOURGLASS THRONE

As Rune Saint John grapples with the challenges of assuming the Sun Throne, a powerful barrier appears around New Atlantis’s famed rejuvenation center. But who could have created such formidable magic . . . what do they want from the immortality clinic . . . and what remains of the dozens trapped inside?

Though Rune and his lifelong bodyguard Brand are tasked with investigating the mysterious barrier, Rune is also busy settling into his new life at court. Claiming his father’s throne has irrevocably thrown him into the precarious world of political deception, and he must secure relationships with newfound allies in time to keep his growing found family safe. His relationship with his lover, Addam Saint Nicholas, raises additional political complications they must navigate.  But he and Brand soon discover that the power behind the barrier holds a much more insidious, far-reaching threat to his family, to his people, and to the world.

Now, the rulers of New Atlantis must confront an enemy both new and ancient as the flow of time itself is drawn into the conflict. And as Rune finds himself inexorably drawn back to the fall of his father’s court and his own torture at the hands of masked conspirators, the secrets that he has long guarded will be dragged into the light—changing the Sun Throne, and New Atlantis, forever.

The climax of the first trilogy in the nine-book Tarot Sequence, The Hourglass Throne delivers epic urban fantasy that blends humor, fast-paced action, and political intrigue.

Zabé Ellor is the author of Silk Fire, as well as the YA contemporary novels May The Best Man Win (Roaring Brook Press) and Acting The Part (HarperTeen). A graduate of Cornell University, he currently lives in southern California. An avid reader and writer, his non-literary interests include running, hiking, and camping.

K.D. lives and writes in North Carolina, but has spent time in Massachusetts, Maine, Colorado, New Hampshire, Montana, and Washington. (Common theme until NC: Snow. So, so much snow.)

You can purchase either book below! You can also donate any amount of your choice below to help sustain our events programming.

Order the books below!