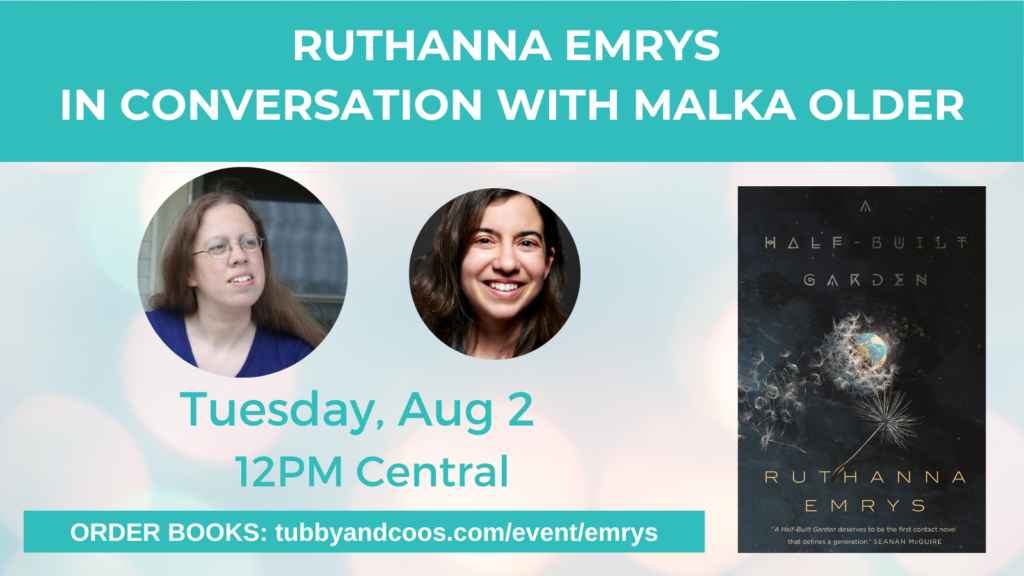 Tubby & Coo’s Mid-City Bookshop is pleased to present Ruthanna Emrys in conversation with Malka Older about Emrys’ new novel A Half-Built Garden! This event will be held digitally via Crowdcast.

You can register for this event by ordering A Half-Built Garden below or you can click here to register with a donation of any amount of your choice. Donations are to help sustain our events programming. If you cannot afford to purchase the book or to donate even $1, you may register for the event for free, no questions asked, by e-mailing us at events@tubbyandcoos.com. There will also be the option to purchase the book during the event!

To Register: Order A Half-Built Garden below, or click the “Register” button below!

ABOUT A HALF-BUILT GARDEN

In the vein of the great Ursula K. LeGuin, Ruthanna Emrys brings a new novel of first contact bursting with quiet, tenuous hope and an underlying warmth. From the opening of Judy Wallach-Stevens, pausing a first contact meeting with aliens for the necessary task of changing a baby diaper, Emrys turns many science fiction tropes such as first contact, climate change, and extraterrestrial colonization on their head.

A Half-Built Garden tells the story of friendly aliens, arrived on earth in the year 2083 to convince the people of Earth to leave their ecologically-ravaged planet and join them in the stars. The Earth itself is divided between corporations, nation-states, and watershed networks that all vie for a chance to negotiate with the aliens – but it’s the latter group that have taken responsibility for the earth with democratic decision-making and aren’t ready to leave before healing the planet.

Ruthanna Emrys’s extraordinary vision of the future – optimistic yet encompassing all the complexity of humanity – has already earned the highest praise. Malka Older (author of Infomocracy) calls it “a vitally important exploration of the meaning of family and community,” and Seanan McGuire (author of the Wayward Children series) declares that it “deserves to be the first contact novel that defines a generation.”

Ruthanna Emrys lives in a mysterious manor house on the outskirts of Washington, DC with her wife and their large, strange family. Her stories have appeared in a number of venues, including Strange Horizons, Analog, and Tor.com. She is the author of the Innsmouth Legacy series, which began with Winter Tide. She makes home-made vanilla, obsesses about game design, gives unsolicited advice, and occasionally attempts to save the world.

Malka Older is a writer, aid worker, and sociologist. Her science-fiction political thriller Infomocracy was named one of the best books of 2016 by Kirkus Reviews, Book Riot, and The Washington Post. She is the creator of the serial Ninth Step Station, currently running on Realm, and her short story collection And Other Disasters came out in November 2019. She is a Faculty Associate at Arizona State University’s School for the Future of Innovation in Society and teaches in the genre fiction MFA at Western Colorado University. Her opinions can be found in The New York Times, The Nation, and Foreign Policy, among others.

To Register: Order A Half-Built Garden below, or click the “Register” button below! 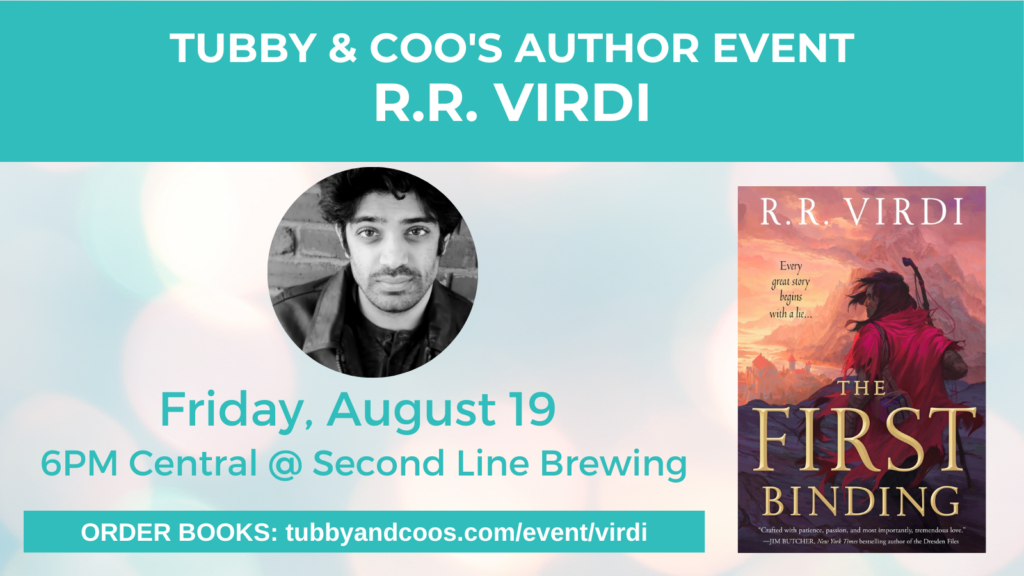 Join us at the Second Line Brewing Den on Friday, August 19 from 6-8PM CT for an author event with R.R. Virdi to discuss his new fantasy novel The First ...
View Calendar
Add