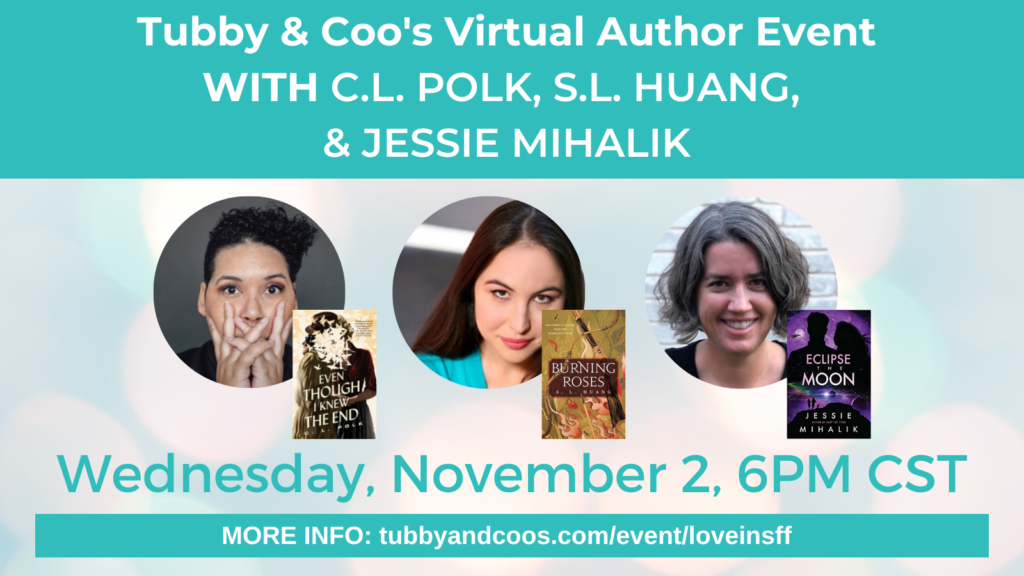 Tubby & Coos Mid-City Bookshop is pleased to present a virtual author panel with C.L. Polk, S.L. Huang, & Jessie Mihalik to celebrate the release of C.L. Polk’s new book, Even Though I Knew the End. The authors will discuss love in SF/F, from family to friendship to romance. This event will be held digitally via Crowdcast.

You can register for this event by ordering any of the books below or you can click here to register with a donation of any amount of your choice. Donations are to help sustain our events programming. If you cannot afford to purchase the book or to donate even $1, you may register for the event for free, no questions asked, by e-mailing us at events@tubbyandcoos.com. There will also be the option to purchase the book during the event!

To Register: Order any of the books below, or click the “Register” button!

ABOUT EVEN THOUGH I KNEW THE END BY C.L. POLK

C. L. Polk turns their considerable powers to a fantastical noir with Even Though I Knew the End.

“Stylish supernatural noir with a heart and a thrumming pulse. I devoured it.”—Laini Taylor

A magical detective dives into the affairs of Chicago’s divine monsters to secure a future with the love of her life. This sapphic period piece will dazzle anyone looking for mystery, intrigue, romance, magic, or all of the above.

An exiled augur who sold her soul to save her brother’s life is offered one last job before serving an eternity in hell. When she turns it down, her client sweetens the pot by offering up the one payment she can’t resist—the chance to have a future where she grows old with the woman she loves.

To succeed, she is given three days to track down the White City Vampire, Chicago’s most notorious serial killer. If she fails, only hell and heartbreak await.

ABOUT BURNING ROSES BY S.L. HUANG

From Hugo Award Winner S. L. Huang Burning Roses is a gorgeous fairy tale of love and family, of demons and lost gods, for fans of Zen Cho and Neon Yang.

Rosa, also known as Red Riding Hood, is done with wolves and woods.

Hou Yi the Archer is tired, and knows she’s past her prime.

They would both rather just be retired, but that’s not what the world has ready for them.

When deadly sunbirds begin to ravage the countryside, threatening everything they’ve both grown to love, the two must join forces. Now blessed and burdened with the hindsight of middle age, they begin a quest that’s a reckoning of sacrifices made and mistakes mourned, of choices and family and the quest for immortality.

ABOUT ECLIPSE THE MOON BY JESSIE MIHALIK

Kee Ildez has been many things: hacker, soldier, bounty hunter. She never expected to be a hero, but when a shadowy group of traitors starts trying to goad the galaxy’s two superpowers into instigating an interstellar war, Kee throws herself into the search to find out who is responsible—and stop them.

Digging up hidden information is her job, so hunting traitors should be a piece of cake, but the primary suspect spent years in the military, and someone powerful is still covering his tracks. Disrupting their plans will require the help of her entire team, including Varro Runkow, a Valovian weapons expert who makes her pulse race.

Quiet, grumpy, and incredibly handsome, Varro watches her with hot eyes but ignores all of her flirting, so Kee silently vows to keep her feelings strictly platonic. But that vow will be put to the test when she and Varro are forced to leave the safety of their ship and venture into enemy territory alone.

Cut off from the rest of their team, they must figure out how to work together—and fast—because a single misstep will cost thousands of lives.

C. L. Polk is the author of the World Fantasy Award winning novel Witchmark, the first novel of the Kingston Cycle. After leaving high school early, they have worked as a film extra, sold vegetables on the street, and identified exotic insect species for a vast collection of lepidoptera before settling down to write silver fork fantasy novels. Polk lives near the Bow River in Calgary, Alberta, in a tiny apartment with too many books and a yarn stash that could last a decade. They ride a green bicycle with a basket on the front. They spend too much time on Twitter.

Jessie Mihalik has a degree in computer science and a love of all things geeky. A software engineer by trade, Jessie now writes full time from her home in Texas. When she’s not writing, she can be found playing co-op video games with her husband, trying out new board games, or reading books pulled from her overflowing bookshelves. Polaris Rising is her debut novel.

To Register: Order any of the books below, or click the “Register” button!