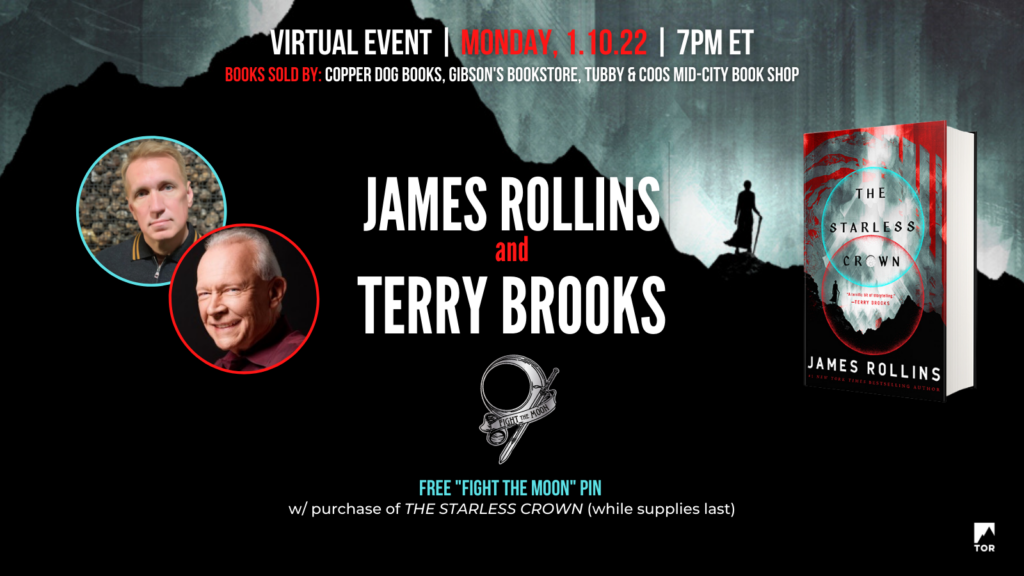 Copper Dog Books, Gibson’s Bookstore, and Tubby & Coos Mid-City Bookshop are pleased to present James Rollins in conversation with Terry Brooks, as they discuss James’s new novel, The Starless Crown! This event will be held digitally via Crowdcast.

You can register for this event by ordering The Starless Crown below or by clicking the “Toss a Coin to Your Bookshop” button to donate of any amount of your choice. When you donate, please add a note with the name of the event so we know what the donation is for and to add you to the registration list. If you cannot afford to purchase the book or to donate even $1, you may register for the event for free, no questions asked, by e-mailing us at events@tubbyandcoos.com.

Copies of The Starless Crown purchased from Tubby & Coo’s will come signed and with a Fight the Moon pin (while supplies last).

To Register: Order The Starless Crown* below, or toss us a coin!

*Orders for Child of Light will not count for registration for this event.*

ABOUT THE STARLESS CROWN

An alliance embarks on a dangerous journey to uncover the secrets of the distant past and save their world in this captivating, deeply visionary adventure from #1 New York Times bestselling thriller-master James Rollins.

A gifted student foretells an apocalypse. Her reward is a sentence of death. Fleeing into the unknown she is drawn into a team of outcasts:

On the run, hunted by enemies old and new, they must learn to trust each other in order to survive in a world evolved in strange, beautiful, and deadly ways, and uncover ancient secrets that hold the key to their salvation. But with each passing moment, doom draws closer.

WHO WILL CLAIM THE STARLESS CROWN?

Terry Brooks was born in Illinois in 1944. He spent a great deal of his childhood and early adulthood dreaming up stories in and around Sinnissippi Park, the very same setting for Running with the Demon. He received his undergraduate degree from Hamilton College, where he majored in English Literature, and went on to earn his graduate degree from the School of Law at Washington & Lee University.

A writer since high school and heavily influenced by William Faulkner, it took him seven years to finish writing The Sword of Shannara, which published in 1977. It became the first work of fiction to ever appear on the New York Times trade paperback bestseller list, where it remained for over five months.

Since that time, he has written numerous novels in the Shannara, Landover, and Word/Void series, including being hand-selected by George Lucas to write the novelization of Star Wars: The Phantom Menace, which hit #1 on the New York Times bestseller list.

“The Shannara Chronicles,” a first season 10-episode TV show, premiered January 5, 2016 on MTV. It adapts The Elfstones of Shannara and features the creative talents of Jon Favreau, Al Gough, Miles Millar, Jonathan Liebesman, and Terry Brooks as an Executive Producer.

Terry Brooks lives with his wife Judine in the Pacific Northwest and on the road meeting his fans.

To Register: Order The Starless Crown* below, or toss us a coin!

*Orders for Child of Light will not count for registration for this event.*