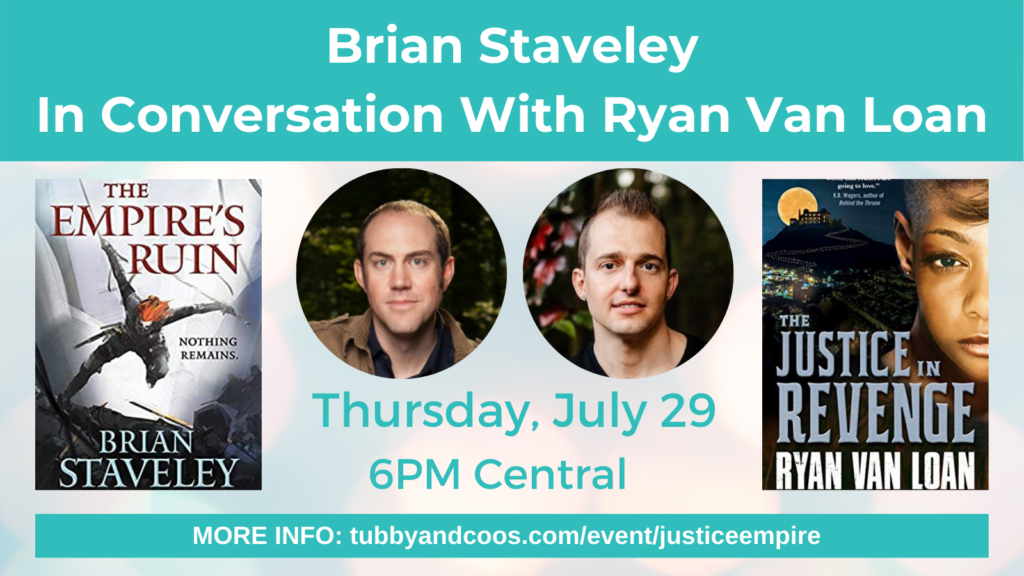 Join us on Thursday, July 29 at 6pm CT for a conversation between authors Brian Staveley and Ryan Van Loan about their new books, The Empire’s Ruin and The Justice in Revenge! This event will livestream to Facebook, YouTube, and our website homepage.

ABOUT THE EMPIRE’S RUIN

The Annurian Empire is disintegrating. The ranks of the Kettral, elite warriors for the emperor, have been decimated from within, and the kenta gates, once granting instantaneous travel across the vast lands of the empire, are closed.

In order to save the empire, one of the surviving Kettral, Gwenna Sharpe, must voyage beyond the edge of the known world through a land that warps and poisons all living things to find the nesting ground of the giant war hawks.

But time is running out. Deep within the southern reaches of the empire a malevolent force begins to stir.

What emerges will change the Annurian Empire forever.

ABOUT THE JUSTICE IN REVENGE

The island nation of Servenza is a land of flint and steel, sail and gearwork, of gods both dead and sleeping. It is a society where the wealthy few rule the impoverished many.

Determined to change that, former street-rat Buc, along with Eld, the ex-soldier who has been her partner in crime-solving, have claimed seats on the board of the powerful Kanados Trading Company. Buc plans to destroy the nobility from within—which is much harder than she expected.

Stymied by boardroom politics and dodging mages at every turn, Buc and Eld find a potential patron in the Doga, ruler of Servenza. The deal: by the night of the Masquerade, unmask whoever has been attempting to assassinate the Doga, thereby earning her support in the halls of power. Blow the deadline and she’ll have them deported to opposite ends of the world.

Armed with Eld’s razor-sharp sword and Buc’s even sharper intellect, the dynamic duo hit the streets just as the shadow religious conflict between the Gods begins to break into open warfare. Those closest to Buc and Eld begin turning up with their throats slit amid rumors that a hidden mastermind is behind everything that’s going wrong in Servenza.

Facing wrathful gods, hostile nobles, and a secret enemy bent on revenge, Buc and Eld will need every trick in their arsenal to survive. Luckily, extra blades aren’t the only things Buc has hidden up her sleeves.

Brian Stavely has taught literature, religion, history, and philosophy, and holds an MA in poetry from Boston University. His books, which have been translated into over a dozen languages, include The Emperor’s Blades, The Providence of Fire, The Last Mortal Bond, and Skullsworn. He lives in Vermont and divides his time between running trails, splitting wood, writing, and chasing his son downhill on a mountain bike. His most recent fantasy novel, The Empire’s Ruin, is just out from Tor.

Ryan Van Loan is an up and coming Science Fiction and Fantasy author who discovered his love of genre fiction at a young age through the works of Robin McKinley, Robert Jordan, Stephen King and many more. Ryan spent six years as a Sergeant in the United States Army Infantry (PA National Guard) where he served on the front lines of Afghanistan. He’s traveled around the world with his wife, wandering Caribbean island haunts, exploring the palaces and cathedrals of Europe, and hiking with elephants in the rain forests of Southeast Asia. Ryan’s debut novel, The Sin in the Steel, was the first book in the Fall of the Gods series. Today, Ryan lives in northeastern Pennsylvania with his wife and two dogs where he’s hard at work on his next novel.