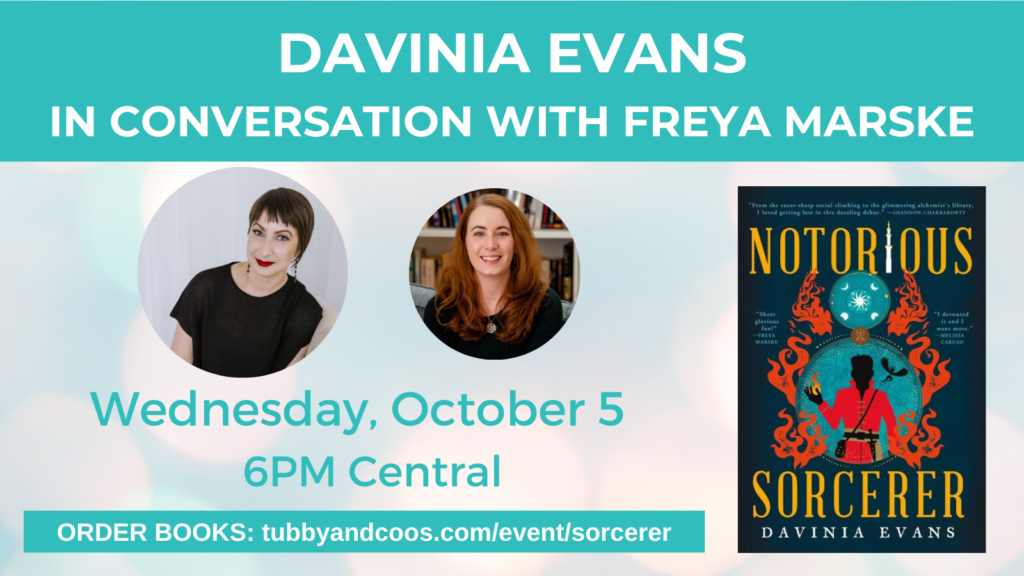 Tubby & Coo’s Mid-City Bookshop is pleased to present Davinia Evans in conversation with Freya Marske about Evans’ new novel Notorious Sorcerer! This event will be held digitally via Crowdcast.

You can register for this event by ordering Notorious Sorcerer below or you can click here to register with a donation of any amount of your choice. Donations are to help sustain our events programming. If you cannot afford to purchase the book or to donate even $1, you may register for the event for free, no questions asked, by e-mailing us at events@tubbyandcoos.com. There will also be the option to purchase the book during the event!

To Register: Order Notorious Sorcerer below, or click the “Register” button below!

In a city filled with dangerous yet heavily regulated alchemical magic, a man from the slums discovers he may be its only hope to survive certain destruction in this wickedly entertaining fantasy.

Welcome to Bezim, where sword-slinging bravi race through the night and rich and idle alchemists make magic out of mixing and measuring the four planes of reality.

Siyon Velo, Dockside brat turned petty alchemist, scrapes a living hopping between the planes to harvest ingredients for the city’s alchemists. But when Siyon accidentally commits an act of impossible magic, he’s catapulted into the limelight–which is a bad place to be when the planes start lurching out of alignment, threatening to send Bezim into the sea.

It will take a miracle to save the city. Good thing Siyon has pulled off the impossible before. Now he just has to master it.

Davinia Evans was born in the tropics and raised on British comedy. With a lifelong fantasy-reading habit and an honours thesis in political strategy, it was perhaps inevitable that she turn to a life of crafting stories full of sneaky ratbags tangling with magic. She lives in Melbourne, Australia, with two humans (one large and one small), a neurotic cat, and a cellar full of craft beer.

Freya Marske is the author of A Marvellous Light, which was an international bestseller and won the Romantic Novel Award for Fantasy. Her work has appeared in Analog and has been shortlisted for three Aurealis Awards. She is also a Hugo-nominated podcaster, and won the Ditmar Award for Best New Talent. She lives in Australia.

To Register: Order Notorious Sorcerer below, or click the “Register” button below!