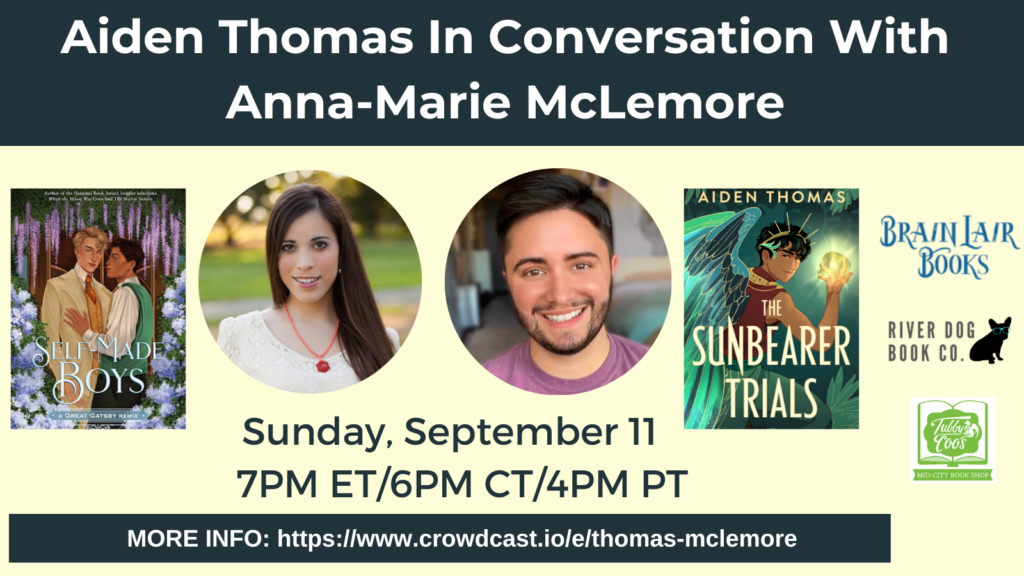 You can register for this event by ordering The Sunbearer Trials or Self-Made Boys below or you can click here to register for free.  There will also be the option to purchase the book during the event!

To Register: Order one of the books below, or click the “Register” button below!

Register for the Event

Welcome to The Sunbearer Trials, where teen semidioses compete in a series of challenges with the highest of stakes, in this electric new Mexican-inspired fantasy from Aiden Thomas, the New York Times bestselling author of Cemetery Boys.

“Only the most powerful and honorable semidioses get chosen. I’m just a Jade. I’m not a real hero.”

As each new decade begins, the Sun’s power must be replenished so that Sol can keep traveling along the sky and keep the chaotic Obsidian gods at bay. Sol selects ten of the most worthy semidioses to compete in the Sunbearer Trials. The winner carries light and life to all the temples of Reino del Sol, but the loser has the greatest honor of all—they will be sacrificed to Sol, their body melted down to refuel the Sun Stones, protecting the world for another ten years.

Teo, a seventeen-year-old Jade semidiós and the trans son of the goddess of birds, isn’t worried about the Trials . . . at least, not for himself. His best friend, Niya is a Gold semidiós and a shoo-in for the Trials, and while he trusts her abilities, the odds of becoming the sacrifice is one-in-ten.

But then, for the first time in over a century, the impossible happens. Sol chooses not one, but two Jade competitors. Teo, and Xio, the thirteen-year-old child of the god of bad luck. Now they must compete in five trials against Gold opponents who are more powerful and better trained. Worst of all, Teo’s annoyingly handsome ex-best friend and famous semidiós Hero, Aurelio is favored to win. Teo is determined to get himself and his friends through the trials unscathed—for fame, glory, and their own survival.

Aiden Thomas, New York Times-bestselling author of Cemetery Boys and Lost in the Never Woods, received their MFA in Creative Writing from Mills College. Born in Oakland, California, Aiden often haunted Mountain View Cemetery like a second home during their misspent youth. As a queer, trans Latinx, Aiden advocates strongly for diverse representation in all media. Aiden is notorious among their friends for always being surprised by twist endings to books/movies and organizing their bookshelves by color. When not writing, Aiden enjoys exploring the outdoors with their dog, Ronan. Their cat, Figaro, prefers to support their indoor hobbies, like reading and drinking too much coffee.

New York City, 1922. Nicolás Caraveo, a 17-year-old transgender boy from Wisconsin, has no interest in the city’s glamor. Going to New York is all about establishing himself as a young professional, which could set up his future—and his life as a man—and benefit his family.

Nick rents a small house in West Egg from his 18-year-old cousin, Daisy Fabrega, who lives in fashionable East Egg near her wealthy fiancé, Tom—and Nick is shocked to find that his cousin now goes by Daisy Fay, has erased all signs of her Latine heritage, and now passes seamlessly as white.

Nick’s neighbor in West Egg is a mysterious young man named Jay Gatsby, whose castle-like mansion is the stage for parties so extravagant that they both dazzle and terrify Nick. At one of these parties, Nick learns that the spectacle is all meant to impress a girl from Jay’s past—Daisy. And he learns something else: Jay is also transgender.

As Nick is pulled deeper into the glittery culture of decadence, he spends more time with Jay, aiming to help his new friend reconnect with his lost love. But Nick’s feelings grow more complicated when he finds himself falling hard for Jay’s openness, idealism, and unfounded faith in the American Dream.

Anna-Marie McLemore (they/them) writes magical realism and fairy tales that are as queer, Latine, and nonbinary as they are. Their books include THE WEIGHT OF FEATHERS, a 2016 William C. Morris YA Debut Award Finalist; 2017 Stonewall Honor Book WHEN THE MOON WAS OURS, which was longlisted for the National Book Award in Young People’s Literature and was the winner of the James Tiptree Jr. Award; WILD BEAUTY, a Kirkus, School Library Journal, and Booklist best book of 2017; BLANCA & ROJA, a New York Times Book Review Editors’ Choice; MISS METEOR, co-authored with Tehlor Kay Mejia; DARK AND DEEPEST RED, a Winter 2020 Indie Next List selection; THE MIRROR SEASON, which was also longlisted for the National Book Award in Young People’s Literature; the recently released LAKELORE and SELF-MADE BOYS: A GREAT GATSBY REMIX (coming September 6, 2022).

To Register: Order The Sunbearer Trials below, or click the “Register” button below!

Register for the Event