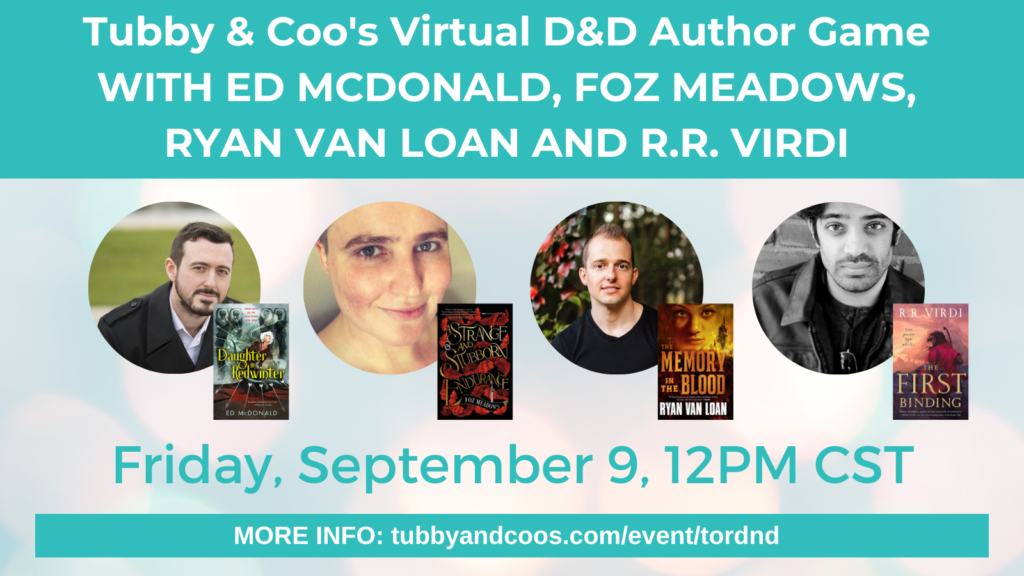 Tubby & Coos Mid-City Bookshop is pleased to host a Dungeons & Dragons one-shot campaign with Tor authors Ed McDonald, Foz Meadows, Ryan Van Loan, and R.R. Virdi. These authors will compete as their characters from their most recent novels. This event will be held digitally via Crowdcast.

You can register for this event by ordering any of the books below or you can click here to register with a donation of any amount of your choice. Donations are to help sustain our events programming. If you cannot afford to purchase the book or to donate even $1, you may register for the event for free, no questions asked, by e-mailing us at events@tubbyandcoos.com.

ABOUT DAUGHTER OF REDWINTER BY ED MCDONALD

From the author of the critically-acclaimed Blackwing trilogy comes Ed McDonald’s Daughter of Redwinter, the first of a brilliant fantasy series about how one choice can change a universe.

Raine can see—and speak—to the dead, a gift that comes with a death sentence. All her life she has hidden, lied, and run to save her skin, and she’s made some spectacularly bad choices along the way.

But it is a rare act of kindness—rescuing an injured woman in the snow—that becomes the most dangerous decision Raine has ever made.

Because the woman is fleeing from Redwinter, the fortress-monastery of the Draoihn, warrior magicians who answer to no king, and who will stop at nothing to reclaim what she’s stolen. A battle, a betrayal, and a horrific revelation force Raine to enter the citadel and live among the Draoihn. She soon finds that her secret ability could be the key to saving an entire nation.

Though she might have to die to make it happen . . .

ABOUT A STRANGE AND STUBBORN ENDURANCE BY FOZ MEADOWS

“Stolen me? As soon to say a caged bird can be stolen by the sky.”

Velasin vin Aaro never planned to marry at all, let alone a girl from neighboring Tithena. When an ugly confrontation reveals his preference for men, Vel fears he’s ruined the diplomatic union before it can even begin. But while his family is ready to disown him, the Tithenai envoy has a different solution: for Vel to marry his former intended’s brother instead.

Caethari Aeduria always knew he might end up in a political marriage, but his sudden betrothal to a man from Ralia, where such relationships are forbidden, comes as a shock.

With an unknown faction willing to kill to end their new alliance, Vel and Cae have no choice but to trust each other. Survival is one thing, but love—as both will learn—is quite another.

Byzantine politics, lush sexual energy, and a queer love story that is by turns sweet and sultry, Foz Meadows’ A Strange and Stubborn Endurance is an exploration of gender, identity, and self-worth. It is a book that will live in your heart long after you turn the last page.

ABOUT THE MEMORY IN THE BLOOD BY RYAN VAN LOAN

The Memory in the Blood is the pulse-pounding conclusion to Ryan Van Loan’s The Fall of the Gods series, featuring sea battles, hidden libraries, warring deities, old enemies, and one woman’s desire for liberation and revenge.

When her quest to destroy the Gods began, Buc was a child of the streets. Now she is a woman of steel, shaped by gaining and losing power, tempered by love and betrayal, and honed to a fine edge by grief and her desire for vengeance.

A perilous, clandestine mission to a hidden library uncovers information that is key to destroying both the Dead Gods and their enemy, the Goddess Ciris. Ciris’s creation, Sin, who lives inside Buc, gives her superhuman abilities and tempts her with hints of even greater power. With that power, she could achieve almost anything—end the religious war tearing her world apart, remake society at a stroke—but the price would be the betrayal of everything she has fought for . . . and the man she loved would still be dead.

In the middle of this murderous, magical maelstrom, a coded message smuggled out of the heart of the Dead Gods’ cathedral reveals that the Dead Gods intend to destroy Ciris—and much of the world with her.

If Buc has to destroy all Gods, eat the rich, and break the world’s economy to save the people, she will do it. Even if it costs her everything.

ABOUT THE FIRST BINDING BY R.R. VIRDI

All legends are born of truths. And just as much lies. These are mine. Judge me for what you will. But you will hear my story first.

I buried the village of Ampur under a mountain of ice and snow. Then I killed their god. I’ve stolen old magics and been cursed for it. I started a war with those that walked before mankind and lost the princess I loved, and wanted to save. I’ve called lightning and bound fire. I am legend. And I am a monster.

My name is Ari.

And this is the story of how I let loose the first evil.

Ed McDonald is the author of the Raven’s Mark and Redwinter Chronicles series of novels. He studied Ancient History and Archaeology at the University of Birmingham, and Medieval History at Birkbeck College, University of London. Ed is passionate about fantasy tabletop roleplay games and has studied medieval swordsmanship since 2013. He currently lives with his partner, author Catriona Ward, in London, England.

Foz Meadows is a queer Australian author, essayist, reviewer and poet. She has won two Best Fan Writer awards (a Hugo Award in 2019 and a Ditmar Award in 2017) for yelling on the internet, and has also received the Norma K. Hemming Award in 2018 for her queer Shakespearean novella, Coral Bones. Her essays, reviews, poetry and short fiction have appeared in various venues, including Uncanny, Apex Magazine, Goblin Fruit, HuffPost, and Strange Horizons. Meadows currently lives in California with her family. A Strange and Stubborn Endurance is her fifth novel.

Ryan Van Loan is an up and coming Science Fiction and Fantasy author.  He started reading his Grandfather’s Reader’s Digest when he was four years old.  Soon after, he read The Adventures of Tom Sawyer before eventually discovering science fiction and fantasy through the works of Robin McKinley, Robert Jordan, Stephen King and many more.  He moved around a lot in his childhood from Montana to Georgia to Puerto Rico before finally ending up in Pennsylvania. Ryan served six years as a Sergeant in the United States Army Infantry (PA National Guard) where he served on the front lines of Afghanistan.  All of that travel got into his blood and Ryan has traveled around the world with his wife, wandering Caribbean island haunts, exploring the palaces and cathedrals of Europe, and hiking with elephants in the rain forests of Southeast Asia. When he’s not traveling Ryan enjoys hiking, soccer (football), tabletop gaming, weightlifting (with his personal best coming from deadlifting three times his body weight), and all things culinary.  Ryan’s debut novel, The Sin in the Steel (Tor Books), Book One in the Fall of the Gods series came out on July 21, 2020.  Today, Ryan lives in northeastern Pennsylvania with his wife and two dogs where he’s hard at work on his next novel.

R.R. Virdi is a two-time Dragon Award finalist and a Nebula Award finalist. He is the author of two urban fantasy series, The Grave Report, and The Books of Winter. One of his short stories is part of a collection of artists’ works to go to the moon aboard the Astrobotic Peregrine Lunar Lander in 2022. His love of classic cars drove him to work in the automotive industry for many years before he realized he’d do a better job of maintaining his passion if he stayed away from customers.

He was born and raised in Northern Virginia and is a first generation Indian-American with all the baggage that comes with. He’s offended a long list of incalculable ancestors by choosing to drop out of college and not pursue one of three pre-destined careers: a lawyer, doctor, engineer. Instead, he decided to chase his dream of being an author. His family is still coping with this decision a decade later.

He expects them to come around in another fifteen to twenty years.

Should the writing gig not work out, he aims to follow his backup plan and become a dancing shark for a Katy Perry music video.