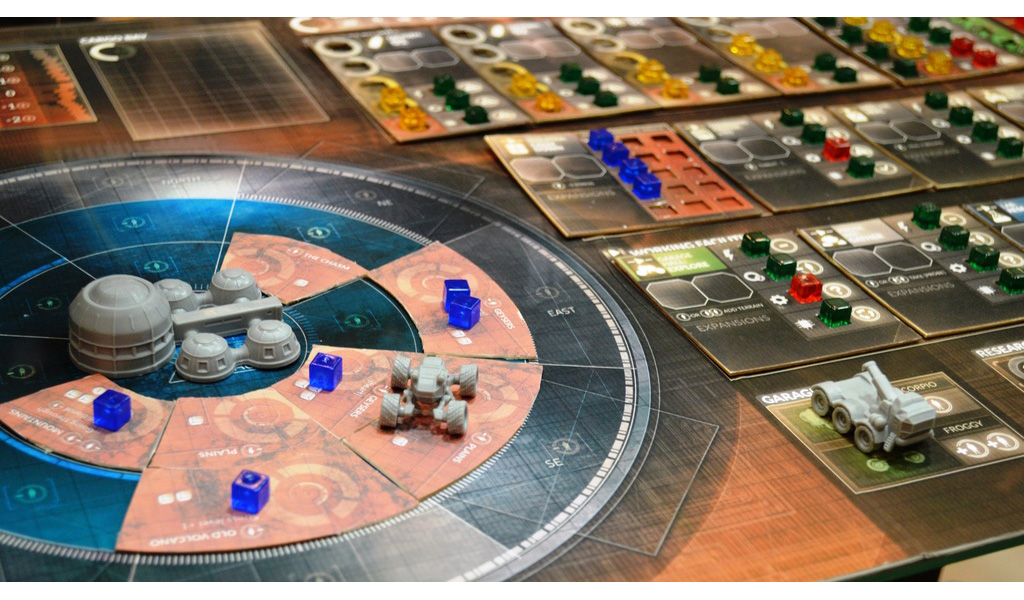 Our partners at Down to Game have reviewed First Martians, a cooperative game revolving around a team of astronauts trying to survive on Mars! Read on for Caylie Sadin’s thoughts on this game! DOWN TO GAME REVIEWS FIRST MARTIANS, BY CAYLIE SADIN

First Martians: Adventures on the Red Planet is a co-operative board game published by Portal Games that revolves around a team of astronauts trying to survive on Mars. (This is a spoiler-free review.)

First Martians: Adventures on the Red Planets offers a whole lot of game in one box. You have the option to play one of 6 standalone missions, a campaign, and a legacy campaign. So far I have played 2 of the standalone missions and the campaign, which totals to 7 games. And honestly, I’m ready to go sit down at the table and play some more right now. Unlike Robinson Crusoe, First Martians: Adventures on the Red Planet requires a free app to play. The app helps you set up the game for each mission. It also randomizes different parts of the game and keeps all of your mission goals handy in one place.

In each mission, you’ll have mandatory major goals that you need to accomplish, such as exploring a certain area and then building something out on Mars. You may also have some optional goals, like collecting some samples from the terrain around your base or building a new greenhouse.

Each scenario will have a set number of rounds to accomplish these goals. First Martians: Adventures on the Red Planet calls these “sols,” a.k.a. days. The app helps you keep track of what round you’re on. It also takes you through the maintenance steps that happen at the beginning and the end of each round, such as energy, food and oxygen production and malfunctions. I’ll talk about those parts of the game a little later.

The basic game play revolves around each player having two action pawns. Players can then assign these pawns to actions on the board. Often though, actions will require more than one pawn to accomplish. And for things like exploring or gathering, you can make the choice to do it as a safe or as a risky action.

A safe action requires an additional pawn, while a risky action doesn’t. If you play it safe, the action simply happens. Just like in Robinson Crusoe, if you decide to chance it as a risky action, you’ll have to roll the dice. There are three dice, the success die, the wound die, and the adventure die. So if you’re taking a risky action, it’s possible that you may not succeed. You could also take a wound and/or have to go on an adventure. The app handles adventures, and these are more often than not negative. Even if they’re not so bad in the beginning, that adventure could come back to haunt you later.

You will all have to work together to decide what the most important actions are and how you’ll allocate your pawns. Do you explore a new area of Mars to further your main mission goal or do you go to the Med Bay to heal? Or maybe you build an upgrade to make your life a bit easier… Or should you plant a seed that will eventually grow into food? And do you have enough time to do everything safely, or will you need to take some risky actions? There are a ton of different actions you can take, but it almost always feels like there’s never enough time to do everything. Making matters tougher is the fact that something is almost always going horribly wrong.

At the beginning and end of each turn malfunctions can happen. Each room in your base has different parts that allow it to continue to function. When everything is working, you’ll have green cubes next to those parts. Many of these rooms are also how you can take an action. For instance the Med Lab is where you need to go to take the heal action. If something is broken in your Med Lab and you go there anyway, you might have to spend precious resources to use that space. As you can imagine, malfunctions suck. They can completely derail your carefully laid out plan and force you to waste precious actions on fixing the base. There’s a lot more that goes into how malfunctions happen, which includes dice rolling, malfunction tracks and malfunction cards. I’m not going to go into the nitty gritty of the rules here, but just know that the effects from these cards run the gamut of simply a little sucky to potentially devastating.

Besides going through the events phase, at the beginning of each round you’ll also have to go through a production phase. This is where you have to feed your astronauts. If you’re not producing enough food, you have to start eating into your food reserves. If you don’t have any food reserves, whoever isn’t able to eat has to take a wound.

The production phase is also when you assess if you have enough power and oxygen to support the different structures in your base. If you aren’t producing enough power or oxygen to run everything, you have to choose a room to put into shutdown mode. Having a room in shutdown means you can’t use it, and it also means you will add more stress to your morale tracker.

You will also increase the stress track during the production phase. Stress is increased one notch per astronaut and then you also add any additional stress thanks to random events or rooms in shutdown. When your stress level hits 18, you have a choice: push your morale tracker down or have every astronaut take a wound. If your moral tracker is already at the bottom ( -2 ), then each astronaut has to take a wound.

The First Martians: Adventures on the Red Planet app takes care of reminding you the order in which all of these production and stress phases happen. It also remind you of when you have to go through the malfunctions phase. The app is incredibly helpful. It keeps everything organized and smoothly helps run the game for you.